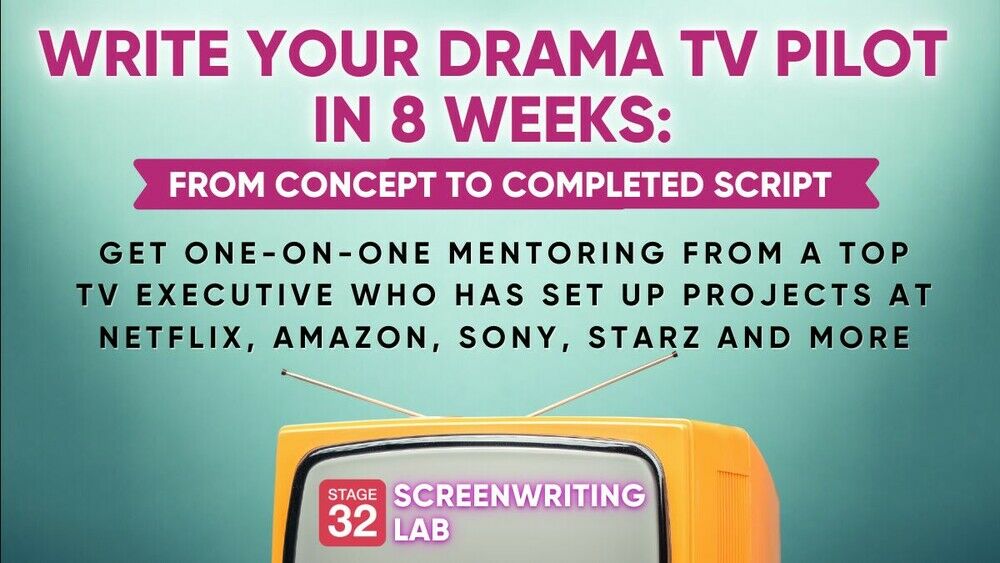 Do you have a pilot script in your head that you have been trying to write for a long time? Do you have a story that would be perfect for a drama TV series but just don’t have the support you’re looking for to actually get it written?

We have you covered! This lab is for YOU!

In this exclusive Stage 32 Lab, literary manager and TV Executive Anna Henry will work directly with you in a class setting and also during one-on-one sessions with the goal of helping you write a fantastic, market-ready drama pilot.

To do so, Anna will guide you through picking a concept, creating engaging characters, perfecting your structure, constructing an outline and, finally, writing your pilot.

If you already have a concept or even a completed pilot, Anna will use the same tools to help you hone and sharpen your material.

Over the course of a 15 year career, Anna Henry has read thousands of television scripts and worked with hundreds of writers. Anna began her career as a development executive at Nickelodeon, then crossed over to prime-time television working at CBS and ABC in drama development and programming before working in management and establishing herself as an independent producer. Anna was Head of Development at Andrea Simon Entertainment, a boutique literary management and production company representing writers and directors. Anna has set up projects at Sony, 20th Century Television, EOne, Starz, Amazon, Netflix, Corus, ITV America to name just some. Anna’s client credits include Netflix’s SEVEN SECONDS; Starz’ VIDA; BET’s IN CONTEMPT; HBO’s THE DEUCE, BIG LOVE, and VINYL; Showtime’s THE CHI; NBC’s THIS IS US; The CW’s JANE THE VIRGIN; DirecTV’s KINGDOM, AMC’s FEAR THE WALKING DEAD; PBS’ MERCY STREET; and more.

Read your syllabus and plan decide on an idea for the drama or dramedy pilot you want to write. Do appropriate research about the world of your show.

This week we will cover the syllabus, your goals for this lab and launch into a discussion of what elements you have to create for a successful show.

We will discuss doing research about the world and characters you will be writing about. We will talk about coming up with a story engine for your show, and how setting, tone and point-of-view affect your story. We will discuss creating strong characters for your pilot. What makes a character compelling, the difference between likeable vs. relatable characters, and effective antagonists. We will address the differences between ensembles and star vehicles. We will take time to go over how to build complex relationships and use them to propel a series. Finally, we will talk about finding a “template show” to aid your writing.

The assignments for this week will be:

This week we will discuss the function of a beat outline. We will break down pilot structure, plot and subplots and discuss some differences between pilots for episodic vs. serialized pilots. We will talk about pacing, building stakes, creating mystery / suspense / anticipation, and act breaks. We will go over page counts and number of characters. We will also address budget and production considerations.

This week will consist of one-on-one consultations regarding pilot structure. Each writer will send in their pilot outline in advance and will have a phone consultation to discuss what works and what doesn’t.

This week we will go over all the necessary story beats that exist in Acts 1 and 2 of a drama pilot, including world-building, setting up the “rules of the universe,” establishing character, setting tone, and creating an effective launch point for your pilot. We will talk about how to introduce characters, give backstory, and convey character through unique voices. We will address the challenges of exposition and some ways to bring the audience into the world of your pilot. We will also talk about the function of a teaser.

We will discuss how to craft dense, efficient scenes that move the plot forward and reveal character and avoid “dead” scenes. We will talk about how to enter and leave scenes and move from scene to scene using character motivations. We will address how to weave together multiple storylines. We will also talk about nuanced dialogue and the value of subtext.

This week will consist of one-on-one consultations regarding the first half of your pilot. Each writer will send in their draft in advance and will have a phone consultation to discuss what works and what doesn’t.

We will cover the necessary story beats that traditionally exist in acts 3 – 4 or 5 of a drama pilot, including building subplots, increasing layers and complexity, and making sure every character has a place in the puzzle and begins an arc. We will discuss writing dense scenes that move the story forward as well as reveal character. We will address how to create a series launch point at the end of your pilot that clearly establishes the series engine. We will also talk about how to embed larger themes into your story and address some common pilot writing mistakes.