Screenwriting from the Soul, How to turn a concept into a successful screenplay while learning about yourself in the process by Richard Krevolin 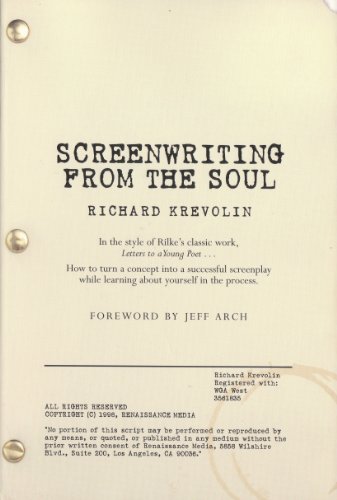 Screenwriting from the Soul, How to turn a concept into a successful screenplay while learning about yourself in the process  by Richard Krevolin

It’s a rare how-to book that can draw you into the characters and story, but Krevolin manages to take readers on a journey complete with arcs, dialog, and conflict by following the style made famous by Rainer Rilke in “Letters to a Young Poet,” first published in 1929.

Beginning with the wannabe writer’s first ask to be mentored, a retired and crotchety “has-been” called Professor Krevolin at first refuses, but the aspiring writer stubbornly persists. What follows is a back-and-forth entertaining journey that goes beyond format and technique into what makes for a writer strong enough to fail but eventually succeed in a world full of passes until the coveted “Recommend.”

Through early chapters the student’s false hopes are banished (sometimes with a heavy hammer, but always with a spot of humor) and he’s groomed into a teachable writer who’s able to take direction, learn from critiques, and produce improved results. The professor delivers the lessons in easy-to-follow doses. Toward the halfway mark he gives practice assignments both the student and reader can use to improve skills. Many of his concepts are found in other places, but his explanations are fresh and relatable, and his illustrations from classic movies don’t weigh down the story.

The professor teaches our young writer the basics from conception, through execution and presentation, but not without brutal but necessary lessons in how moving pictures work, what should be included based on genre, and how to entertain modern audiences who expect different things from the days when he first began.

Richard Krevolin has been involved in the business for decades and is regarded as one of the foremost teachers and consultants in screenwriting and business marketing today.

Professor Krevolin has taught both undergraduate and graduate screenwriting classes at USC Cinema/TV School. Over 20,000 screenwriters have been taught by him in LA and around the world. His students have sold film scripts and TV shows to Universal, Fox, Paramount, Dreamworks SKG and numerous other big studios and production companies. He’s taught in countless festivals and workshops, and at least three of his seminars are now best-selling DVDs.