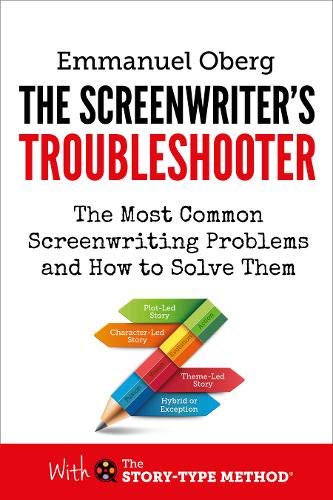 Screenwriter’s Troubleshooter Unchained: The Most Common Screenwriting Problems and How to Solve Them By Emmanuel Oberg*
by Beverly Nault

In a previous post, I reviewed Oberg’s Screenwriting Unchained which explains his Story-Type Method® using a fractal, versatile blueprint to construct screenplays that are either Plot-led, Character-led, Theme-led, or a hybrid combination. “This is the backbone of the Story-Type Method: leaving behind the one-size-fits-all story theories and adapting the development process to the story-type of each project.” Emmanuel Oberg

Used side-by-side, Unchained and Troubleshooter are designed to identify and correct both common and underlying problems identified in feedback from readers or development analysis. Oberg realizes notes are often generic, cryptic, or dogmatic and could cause new issues to arise “until you solve the actual problem underneath, you’ve not made progress. In some cases, you’ve taken a step backwards.” E-version, p9.

In Troubleshooter, the companion volume to Unchained, Oberg lists by chapter forty of the most common problems such as poor dialog, one-dimensional characters, and contrived or holey plots. At the end of each chapter active links connect to possible ways to correct the issue. For example, if feedback includes the comment, “The characters are too similar,” remedies might be found in “The Characters’ Backstories are Irrelevant” or in “Developing a Character-led Story.”

Troubleshooter includes an extensive glossary with links that clarify Oberg’s use of terms. Troubleshooter doesn’t repeat the Story-Type Method in-depth, so it should be consulted following a thorough understanding of Unchained. Oberg relies on methods based on Maslow’s Hierarchy to provide a more satisfying experience for the reader and viewing audience.

Written for a sophisticated audience, both Unchained and Troubleshooter assume the writer has a working foundation in screenwriting, but the narrative is never dull. He may repeat some information occasionally because the books aren’t meant to be read cover to cover, although I found them interesting enough to do so.

The two books together could help a writer identify why a screenplay isn’t working or improve the quality of one that’s “almost there.” Readers and critics might also find the books helpful to identify specific weaknesses and clarify thoughts more clearly for better feedback and development notes.

*From Amazon – Emmanuel Oberg is a screenwriter, author and creative consultant with more than twenty years of experience in the Film and TV industry. After selling a first screenplay to Warner Bros, he has been commissioned as a writer by StudioCanal, Working Title / Universal, Gold Circle and Film4. He has also designed an internationally acclaimed 3-day Advanced Development Workshop and modules on thriller, comedy, animation and TV Series, all based on the Story-Type Method®. He delivers them with passion to storytellers around the world, online or in person. Emmanuel lives in the UK with his wife and their two daughters.