The Beat Goes On

The Beat Goes On
-Story Beats: A Comparison-
by T Severe, Ph.D., Screenwriter/filmmaker

As screenwriters, we’ve become familiar with some of the popular approaches that a writer can follow in setting up a basic story structure for our script. Story beats can provide the writer with some tentative guideposts to this structure. While the creative process can move in different directions, these story beats help a script follow some conventions typically followed in most films in terms of pacing, dramatic tension, character arcs, etc. Going back to the 3 Act structure of Aristotle to the contemporary approaches of Syd Field and Blake Snyder, each method can help keep your script moving along a steady path that hopefully results in an engaging film.

The following attachment tries to align some of the different approaches using each method’s terminology in hopes of providing a writer with an overall view on how these methods share some common treatment of story beats. Moving from the basic 3 act structure to Joseph Campbell’s, “The Hero’s Journey”, followed by Syd Field’s work, Blake Snyder’s popular “Save the Cat” method, and Paul Chitlik’s approach to Rewriting, the attachment tries to show where the story beats in each author’s method show some basic alignment. The last approach is based on a software application, Contour. While Contour has some limitations, it may help jumpstart your script by prodding you to consider some questions about your story early on that you may find instructive, It also gives a breakdown on several popular films using the software to assist you in becoming familiar with the application’s use. 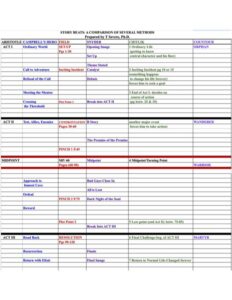 While the list of methods is by no means exhaustive, it illustrates some of the common approaches to story structure with which most screenwriters are familiar. It’s true the creative process is its own beast at times, but referring back to these story beats as you refine your script can help you avoid dead ends and roadblocks and hopefully give you a clearer path that your script can follow.