Tools of the Trade: Each Script You Write Once and Rewrite Many Times Over 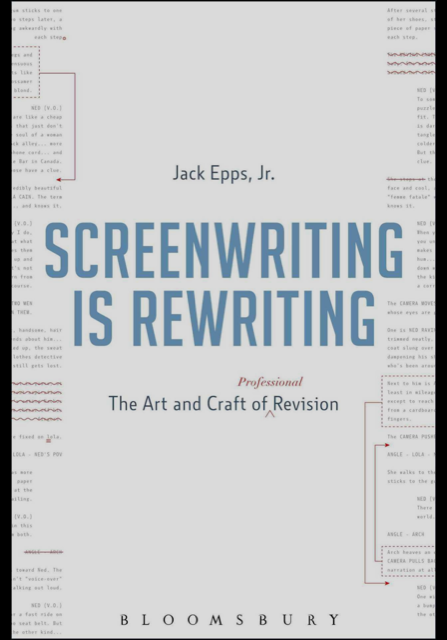 Each script you write once and rewrite many times over…..
by Jessica Brown, Screenwriter and Board Member of Phoenix Screenwriters Association

What? You only write it once? Isn’t it all just writing? Mr. Towne, would you like to explain the difference?

Mr. Epps starts by encouraging us saying that rewriting, when done right, can be satisfying and rewarding. It demands a great deal of deconstruction and reconstruction, reconfiguring and re-conceiving. To succeed you need a plan of attack: to analyze, organize, problem solve, and execute.

In his book he tackles the rewrite process through four pillars: Foundations and Fundamentals, Layering and Details, Screenwriters on Rewriting, and Examples. This holistic approach helps the writer to logically tackle the rewrite process. He then breaks down all the passes and why each is important to improving and elevating your script. He brings in three expert “Rewriters” Robert Towne, Frank Pierson, and Susannah Grant, all whom have mastered rewriting at the professional level to create highly successful movies and TV shows. Mr. Epps interviews each writer about their own rewrite process. They share all kinds of gems and nuggets of great writing advice.

Finally, Mr. Epps provides examples from the studios and students from his program and how they improved their scripts.

So I decided to take his book out for a little rewrite spin around the block. And guess what? It works beautifully. I use to struggle with rewrites, just dreading them more than the actual writing. But I hunkered down in my bunker (writing desk) and followed his process as outlined in his book and I came up with a great rewrite plan of attack for my current rewrite.

First: I embraced what a rewrite actually is. I have come to appreciate that “rewriting makes everyone a better writer.” I needed to “understand how all the screenwriting elements work together to form a cohesive script.”

“I believe writing is rewriting and spend the first half of most days doing just that.” – Dan Gilroy, Writer/Director, Nightcrawler, The Bourne Legacy

I also learned that “no two rewrites are the same, and there is no one way to rewrite.” I also learned to “develop a way to categorize notes and organize rewrites to bring order to a chaotic and confusing process.”

Second: I learned how to Customize and combine passes. I created a Pass for each of the following categories in my story: Concept, World, Structure, Story, Subplots, Relationships, Scenes, Character, Dialogue, Format, and Holistic.

Third: I printed out a copy of my first draft, three hole punched, and added brass brads. I held it and enjoyed the weight of it. This is a great way to celebrate what you have accomplished before you tear it all apart and reconstruct it again. I HIGHLY recommend you do this.

Fourth: I followed Mr. Epps recommendations and set aside several hours and sat down and read my entire script in one sitting. Yes, I got up a few times to stretch and get food. Even if you only wrote 60 pages, it will take you a few hours to read as you stop to make notes. And make all kinds of notes, not just what is broken or not working. When you love a scene, draw a heart or a star or WOW! Embrace your script and all the good, bad, and ugly you see. Remember this is your discovery draft. You are not judging the writing, but rather discovering what your story is really about.

Fifth: I then opened a word document and captured all the thoughts going around in my head. You may say, well, if you captured it all on the script pages, why do this again? Because believe it or not, you will have all these amazing new thoughts, ideas and scenes coming to you and you don’t want to forget a single one.

Sixth: I then wrote my Game Plan of Attack for my Rewrite. Mr. Epps talks about writing your “Statement of Intent.” This is like an extended logline of your rewrite process. My Statement of Intent gave me a clear understanding of what I wanted to accomplish with my rewrite.

I decided that my two main characters needed confront each other in every scene. I also needed to take my five milestone or movie poster moments and maximize how they land in my story by creating more powerful set-up scenes leading up to each of them and then leverage the landing of those scenes to build up towards the next milestone scene.

My Plan of Attack also identified for me that my script was way too long. I needed to cut 28 pages out of my script. That was equivalent to a whole act in my script. I then mapped out how I would get there by cutting out unnecessary or repetitive dialogue. I would create more personal moment scenes and keep a strict page budget on scenes while leveraging Final Draft’s reports to keep me on the straight and narrow.

Jack Epps, Jr reminds us in his book that “rewriting is like working in a construction zone where the deeper you dig the more you are surrounded by rubble. It’s hard to have clarity when you’re in the trenches digging away at the concrete. Often in trying to fix one thing you create a new problem somewhere else.” He saves us by reminding us why he loves rewriting by sharing “For me, one of the pleasures of rewriting is tying up all the loose ends and seeing the whole screenplay finally come together.”

Seventh: I went back through my notes and captured them in each of the categories I identified in my plan. I also took feedback notes from my writers group and dropped those into the appropriate categories. It became crystal clear what I needed to fix in my rewrite for each component.

Finally: I then ranked each category in order of attack. The biggest chunks being the plot and story structure followed by the Character. The other categories fell into place after I figured out what I wanted to do with each of these passes. Now I am absolutely loving the rewrite process and can’t wait to jump in with my next project.

Remember, each rewrite is unique and different. There is no cookie cutter way of doing this.

So who is Jack Epps, Jr? He wrote and produced with Jim Cash the movies Top Gun, Legal Eagles and The Secret of My Success. He has co-authored over 25 screenplays and eight motion pictures that he produced including Turner & Hooch, Dick Tracy and Anaconda. He wrote for some fo the most successful actors in the industry including Tom Cruise, Robert Redford, Tom Hanks, Warren Beatty and others.

Mr. Epps is an Associate Professor and Chair of the Writing for Screen and Television Division in the School of Cinematic Arts. It is safe to say Mr. Epps knows rewriting because he has done so much of it over the years.

Check out his wonderful guide to rewriting and prepare to fall in love with rewriting.

Drop me a line at jessbrown44@gmail.com if you pick up this book and it inspires you to develop your own Plan of Attack for your next rewrite. I would love to hear about your experience.