Tools of the Trade: Now, that’s a great idea!

Erik Bork’s book, The Idea: The Seven Elements of a Viable Story to Screen, Stage or Fiction is the book every writer should start with to test and develop their story idea before they spend several months to several years outlining, plotting, writing, editing, rewriting their script.

This book breaks down the seven elements that each strong high concept idea has to craft a  strong story that goes 90-120 pages.

Erik cleverly breaks down the seven components with the word PROBLEM. He identifies the basic DNA of every story by a series of five questions that the writer can answer and see if their idea will hold an audiences’ attention through the entire story.

Erik discusses the 60/30/10 rule sharing “that 60 percent or more of what makes a project  potentially successful (or not) is the core idea.” Clearly, we need to focus on and nail our idea first, before writing a single word, if our story is to be a success. If we don’t get that critical idea to work, it is easy to see how we will flop around for months and years trying to force our story to work.

Does Mr. Bork know what he is talking about? Absolutely. He has won two Emmys and two  Golden Globe Awards for his work on the HBO miniseries Band of Brothers and From the Earth to the Moon, writing multiple episodes of each and working on the creative producing team— for executive producer Tom Hanks (and Steven Spielberg on Band of Brothers). He has sold original pitches and written television pilots for NBC and Fox, worked on the writing staff of two primetime drama series, and written screenplays on assignment for Universal Pictures, HBO,  TNT, and Playtone.

Erik also teaches for UCLA Extension’s Writers’ Program and National University’s MFA in  Professional Screenwriting program. He has been called one of the “Top Ten Most Influential  Screenwriting Bloggers” for his Flying Wrestler website, where many of the ideas in this book originated. Readers can find much more of his advice there, learn about his one-on-one coaching and consulting, and get his free “Ten Key Principles Successful Writers Understand”  at FlyingWrestler.com/Key-Principles. He also has a great email update that you can sign up for that picks your brain on various writing topics.

In my toolbox of essential resources, this is the book I start with first to ensure I have a  successful foundation to build my story on.

Share your thoughts on this topic and on the book if you decide to add it to your writer’s toolbox. I would love to hear from you at jessbrown44@gmail.com. 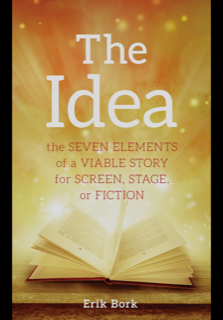