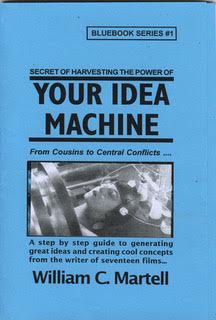 Your Idea Machine by William C. Martell (Bluebook series #1 of 16)
by Beverly Nault

Stuck on what to write next? Not sure if your idea is worth the 110 pages and hours of time it will take to flesh it out? Your dialog dragging? The first in the Bluebook series, William Martell’s Your Idea Machine may be just the tool you’re looking for.

Idea Machine and its companions are only around fifty pages but hold a lot of bang for the bucks. Reflecting on his experience as a produced screenwriter Martell explains how to evaluate whether your ideas are relevant or uninteresting, overdone or fresh. Instead of dismissing weaker ones, though, he shows how to come up with ways to tweak for a new take. Good for general story themes or concepts, the book’s also helpful in coming up with ways to make dialog and scenes snappier.

At the end of each chapter, Martell assigns exercises on brainstorming either the general concept or deeper into making a dull scene or dialog fresh, unpredictable, or twisty. He uses many examples from well-known films to illustrate what works and what doesn’t.

The right idea goes deeper than just the concepts, themes, or twists on genre, and Martell digs into conflicts, whether to chase trends, how trends begin and end and how to determine if your screenplay is high concept or budget, mainstream, or arty. In the chapter titled “Martell’s Story Creation Method,” he shares how he comes up with ideas that studios are likely to be interested in for spec sales or assignments.

Written in a pithy style that’s easy to follow, Martell’s advice comes across as genuine, as if you’re with him in his favorite coffee shop, or in a hands-on workshop. My editor’s eye caught several typos, but not so many I threw the book against the wall. My kindle thanked me for that. I’ve already downloaded his Grand Finale Bluebook, which is also proving to be helpful.

Martell has an active presence on social media where he gives advice and insights, and breaks down screenplays’, directors’, and actors’ performances on his blog sex in a submarine